A recent Sunday morning started with an abrupt end to a languorous, late sleep, the rare kind I would have killed for when my kids were small. Bo the cat was nestled in the crook of my arm. Without my thick glasses, I struggled to focus in the general vicinity of the person standing next to my bed, whose vigorous patting of Bo had jostled me awake. I’m sure I looked puzzled and perhaps – just a smidge – annoyed.

“I thought you were dead,” First born explained.

I need a better night cream, I thought.

In retelling this story to Husband later, I grumbled that I’d buy First born a hand mirror for the next time she suspects her late-sleeping mother of having kicked the bucket. Husband chuckled; First born said she didn’t get it. (Soapbox note: Why is it when parents don’t comprehend pop culture jargon, we are considered hopelessly behind the times, but when the younger set doesn’t understand our own generational shorthand [yes, there’s another one], we have simply provided more proof of our obsolescence?)

For all you whippersnappers out there, placing a hand mirror in front of a comatose person’s nose and mouth will cause the glass to fog if the person is breathing. It’s a more genteel way of detecting life than bouncing a cat on the bed.

You are my kind of people if you get this segue: Dinner last night was adapted from a delicious, easy recipe by singer Gloria Gaynor. 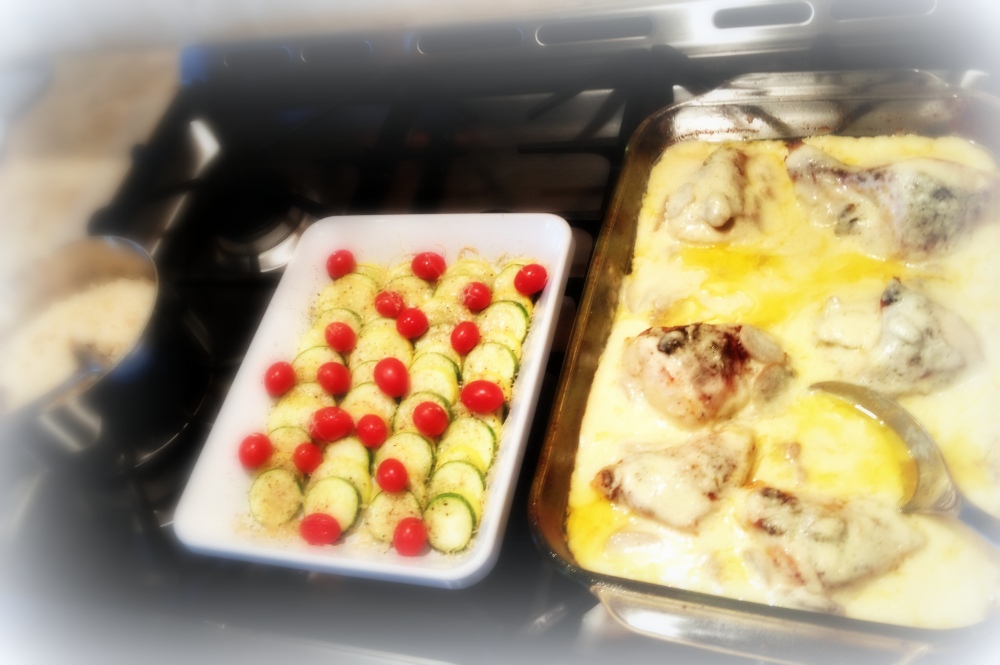 Glorious Chicken, adapted from a recipe by Gloria Gaynor which she mentioned in an interview published in the July 25, 2013, issue of The Wall Street Journal. Yes, there are cans ahead.

3 bone-in, skin-on chicken breasts (Chicken breasts are so huge these days that I usually cut them in half. Brine for 30 minutes in a solution of 2 quarts water, 1/2 cup salt, and 1/2 cup granulated sugar. Rinse thoroughly and dry before using. The brining step can be skipped, but it does enhance the flavor and texture of the chicken.)

1 can condensed cream of chicken soup

1 ounce sherry (the drinking kind from a liquor store, not nasty cooking sherry from a grocery store)

Preheat oven to 425°F. Lightly coat a 9×13-inch pan with non-stick spray. Arrange the chicken breasts in the pan, and sprinkle with seasoned salt, pepper, and garlic powder. (Use a light hand with the salt if you have brined the chicken.) Roast in the oven until golden brown, about 45 minutes.

While the chicken cooks, whisk together the condensed soup, milk, and sour cream. Add the drained mushrooms and stir.

After the chicken has roasted 45 minutes and is golden brown, remove the pan from the oven, and transfer the chicken pieces to a plate. Reserve a couple of spoonfuls of the flavorful drippings to stir into the sour cream mixture; pour off the remaining fat into a heat-proof container for disposal. (I used all of the chicken drippings in my sauce last night, as directed in the original recipe, and you can see the result pooling on the top of the dish in the picture above. My arteries would like you to know that a couple of spoonfuls of drippings is plenty.)

Return the chicken to the now-empty pan. After stirring the hot fat into the sour cream mixture, drizzle in the sherry, stirring to combine. Pour over the chicken, and return the pan to the oven to cook for another 20 minutes.

Remove from the oven, and serve over brown rice and colorful vegetables.

To make the Squash Bake side dish pictured with this post:

Coat the inside of a 9×13-inch baking dish with 1 Tablespoon olive oil.

Layer (aka, “shingle”) alternating colors of squash and zucchini slices in rows down the length of the dish. Scatter 2 handfuls of grape tomatoes on top, if you want to. Drizzle with 1 Tablespoon olive oil, then sprinkle over 1/4 cup grated Parmesan cheese. Season with salt and pepper to taste.

Bake at 350F. until squash are tender and cooked through, about 25 minutes. Serve hot.