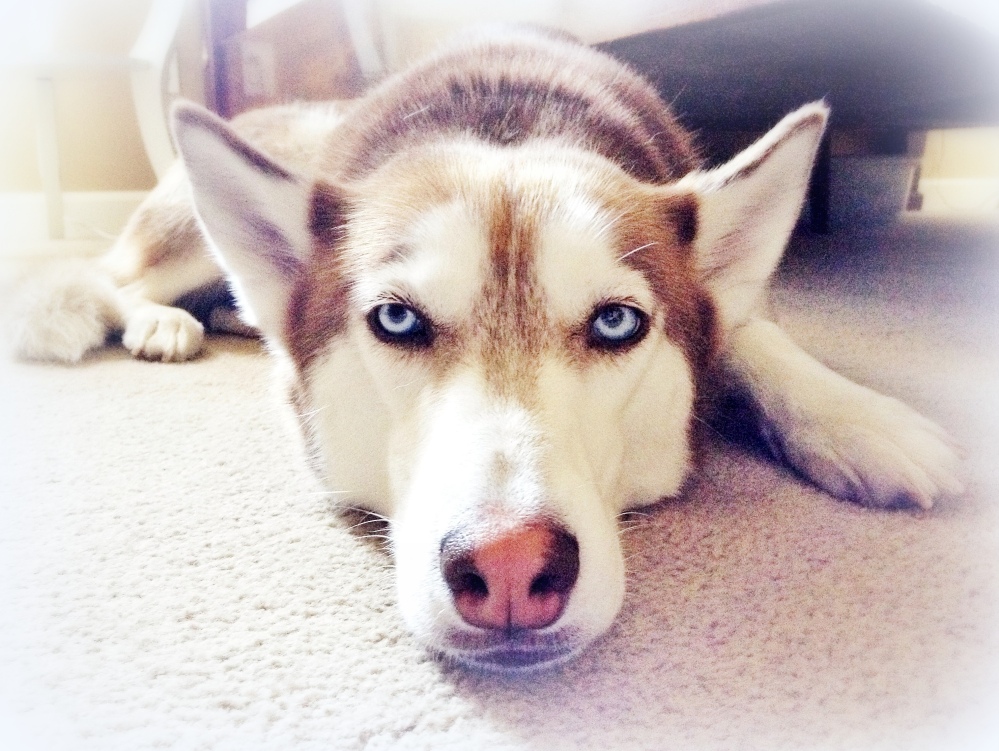 This is Kai last week, the day after a veterinarian administered the husky’s first heartworm treatment. The medicine is a brutal, arsenical compound injected deep into a muscle in the lower back. It kills the parasite worms, which is great, but it also causes lesions within a dog’s pulmonary arteries, which is terrible. Heartworm treatment is a serious matter, requiring that a dog be kept subdued for two months to avoid elevating his heart rate. Without it, Kai’s life would be considerably shortened.

Kai is strong, brave, goofy, and stubborn. He’s suspicious of pills and, after taking antibiotics for weeks in preparation for this heartworm regimen, well-versed in all the ways a pill can be disguised. He scorns Pill Pockets, finds cream cheese (another vehicle for medicine) revolting, and isn’t much motivated by food in general. Getting pain medicine down his throat twice a day for the first five days after his injection was not something I looked forward to.

I buried his pill in a wad of canned dog food, beef and potato stew flavor. Kai rolled the meatball around in his mouth, carefully extracted the pill, spat it out, and swallowed the stew.

I picked up the damp pill with one hand and rummaged through the fridge with the other. Bacon might do. I found a bag of leftover cooked, thick-cut strips, the good stuff from Petit Jean Meats in Morrilton, and wrapped the pill in a slice. Kai chewed thoughtfully for a moment, methodically separated the pill from the meat like he was tying cherry stems with his tongue, spat it out, and swallowed the bacon.

We looked at each other from across the kitchen as I considered my next move.

I picked up the wet, deteriorating pill and returned to the fridge. A package of freshly sliced Boar’s Head deli meat (maple-glazed honey-coated cured turkey, about $11.00 per pound) beckoned. I pulled out a slice and centered the pill in the middle, folded it like a note to be passed in junior high, and offered it to Kai with a clenched-teeth smile. He accepted the gift, and I gently laced my fingers around his muzzle in a loving death grip and encouraged him sweetly to swallow. We locked eyes in a battle of wills for several seconds. Eventually, Kai swallowed the turkey and the pill. I let go of his face, and he ambled off in search of another pair of my husband’s leather shoes to destroy.

When it was time for Kai’s second dose that evening, I was ready. I intercepted him in the kitchen again, and the familiar rattle of pills in a bottle being set on the counter made Kai turn away, his objection already plain. But now I had a secret weapon – Kong Easy Treat (Liver Recipe), a grey paste in a pressurized can, designed to be extruded through a nozzle into a hollow rubber dog toy.

I dressed the sides of the pill with squiggles of odorous grey paste and offered it to Kai. He examined the lump with disdain at first, then interest, and then he lapped up the mess, pill and all. I wanted to raise my arms and shout in triumph, but such a display could spike his heart rate, so I silently pumped a jubilant fist, instead.

Later that evening, I mixed a Moscow Mule. It’s my new favorite cocktail, tested and approved by my friends S and J. My own heart rate slowed as I sipped the drink, watching this beautiful dog as he reclined in his open crate, a carefully calibrated dose of poison coursing through his veins, working to extend his life.

Moscow Mule, adapted from a recipe on the website of Sur la Table, a national chain of kitchenware stores. The drink traditionally is served in copper mugs, but I’d rather spend that money on good vodka.

Into a short glass (like a double old-fashioned) full of fresh ice, pour 1 1/2 ounces of cold vodka. Over that, squeeze the juice from a quarter wedge of a fresh lime, and add the lime wedge to the glass. Top off with chilled ginger beer (Reed’s Extra Ginger Brew is a good one), stir briskly, and serve.

Makes 1, which, if you’ve been engaged in a battle of wits against a Siberian Husky, is not nearly enough.