I have one working foot at the moment, which means I’m not cooking much. Because of surgery a couple of weeks ago, I’m sporting a bulky cast, and my mobility depends on a knee scooter, crutches, and a patient husband who doesn’t mind hauling all of the above here and there — on the rare occasion that I actually must leave the house. My temperament is well-suited to sequestering, actually.

May I tell you what I’ve learned in the process?

Get well cards and flowers work.

So does a happy surprise in the mail, sent by D, who understands that thinking outside the box is especially good for those days when four walls feel exactly like a box. It’s nice to be remembered. 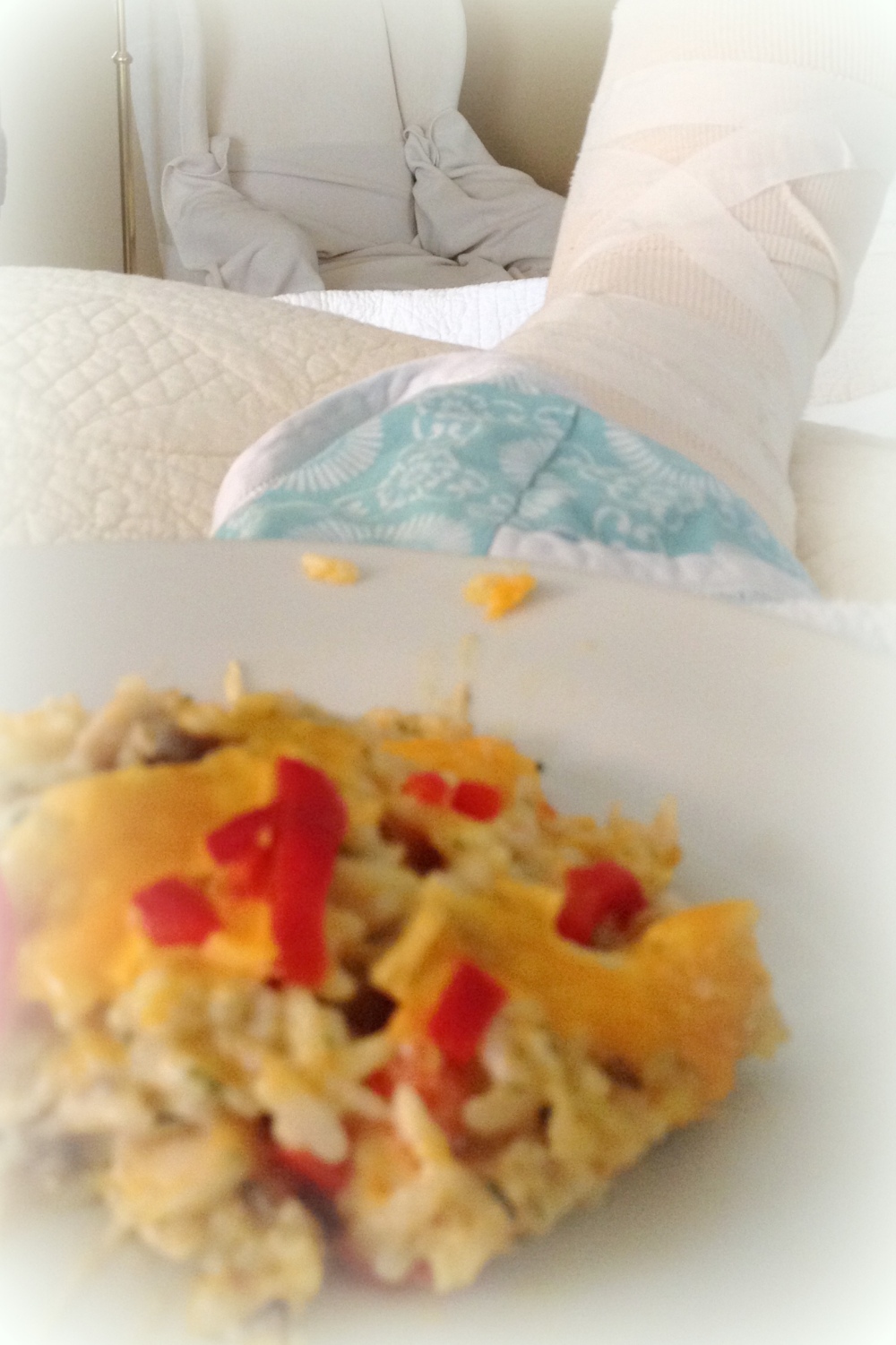 Food from friends and neighbors is blessing and nourishment in one.

I asked my friend S what magic she wrought upon her delicious chicken salad, the last spoonful of which my daughter asked to claim for her boyfriend, so that he could taste how good it was. S was mystified that we loved it so much because it was so plain, so simple, she said. Exactly what a body needs to heal, I say. Ditto her delicious chicken and rice, and the wonderful soup, and K’s tasty shrimp, and M’s lovely tomato tarts, and S2’s satisfying lasagna.

Shower chairs are the bomb.

I had the same surgery on my other foot two years ago. Wanting to save a few dollars at the time, I did not purchase a shower chair, thinking in my ignorance that anything waterproof that I could perch on would work. So I hauled a short aluminum step ladder into the shower for the first two weeks post-surgery, and getting clean became a death-defying balancing act on a cold, narrow, ridged step, all for the purpose of….what, exactly? Saving the same amount of money I would spend without thinking on a cookbook? It wasn’t long before I asked my husband to buy a proper chair for me at Walmart, one with a back and sturdy rubber feet and drain holes in the wide, comfortable seat. Oh, bliss. It’s no worse for wear after being stored for 20 months in a hot attic, and now it’s back in active use.

Accept help. You need it. (Skip this part if blood mentions make you queasy, or if your name starts with the letter J.)

My doctor had me sign a promise not to be alone for the first 24 hours after surgery, because stuff happens. Things bleed. People fall. Stitches pop. Anesthesia fogs the brain. I signed, but I would have considered a pinky swear more binding. As it happened, once my husband got me ensconced at home on a pile of pillows, he got called away to an emergency legal hearing. Feeling fine and competent, I asked my daughter, who had taken the day off from work, to run an errand for her grandfather. Later, full of misplaced confidence, I tried to navigate a trip to the bathroom alone. The odd movement I sensed peripherally under my gimpy foot made no sense to my addled brain. It turned out to be a spreading puddle of blood on the bathroom tile, coursing from the open toe of my cast like red milk from a carton. I tipped my foot up to stem the flow and considered my options. Bleeding to death didn’t seem likely, but passing out was a possibility. There were four dogs in the house, and I wasn’t sure I could depend on them to behave well under the circumstances. Eventually I called my husband and asked him to return home if at all possible. The emergency number provided by my doctor’s office connected me to a nurse who asked a few questions and assured me everything was fine. Should I get the wrap changed, I asked her; this one’s pretty soaked. No, she said, the doctor prefers to keep surgical dressings in place until we see you in three weeks. Someone will change it then. Okay, I said. Yuck, I thought. I’m buying a nice box of chocolates for the poor nurse who gets that job.

If you are consigned to a knee scooter or crutches, your dog will choose that rehabilitation period to have several days of diarrhea. It’s a given.

The second week of my convalescence, Kai the Siberian husky developed a case of the runs that meant the ruin of a 12×15-foot rug and made it necessary to gate off all wall-to-wall carpeted areas of the house. My daughter and grim husband rolled up the big rug and hauled it to the street for city sanitation workers to haul off. The other area rugs they folded and stored. Only the center public areas of the house were left accessible and uncovered, because a hard floor is moppable. The glitch — and there’s always one — is that my knee scooter can’t pass through the dog gates, so accessing my bedroom and bath means reverting to crutches.

I don’t move well on crutches. I teeter, careen, lurch, and sway, occasionally falling into a wall for support. Our dog Macy, a Lhasa apso, is never far from my side. But her memory is sharp, and she ran like the wind when she heard the clack of crutches again after a two-year respite. Too often last time, she came close to being impaled by them, or nearly crushed by things in my path that I knocked over. I despise using crutches, but they hold me up in narrow places.

In a much different way, so have my family and friends held me up in narrow places. I’m so grateful.