Sometimes a bowl of soup is just a bowl of soup, and sometimes it bears the weight of a thousand prayers for protection and swift return.

A soldier I know left for faraway lands last month, honoring his promise to support and defend the Constitution of the United States against all enemies. His friends and loved ones, including a dog named Kai, would have preferred that he stay close, but duty called. He shared a meal with my family the night before departing, and, in the tradition of cooks and mothers and mess hall specialists everywhere who want to fill the bellies of sojourners with sustenance, I made soup.

Making this recipe is an all-afternoon affair. For most of that time, the soup simmers unattended in a slow cooker, and you can see to other things, like making empanadas to have with it. Or watching Denzel Washington take out Russian gangsters in “The Equalizer.” (I lasted until Denzel deployed that corkscrew in a manner not found in any wine guide. Then I scurried back to the kitchen and my empanada dough.) Preparing the ingredients requires a little labor, but I find that is true of all my favorite slow cooker recipes. A small investment of time spent browning the chicken thighs and reducing the tomato base results in major dividends of flavor in the finished product.

Chicken Tortilla Soup, adapted from a recipe in Ready and Waiting, by Rick Rodgers, © 1992, published by Hearst Books, New York, NY. Some ingredients have been changed to reflect what’s available in grocery stores today, and the directions are modified and in my own words.

(See garnish suggestions at the end of the recipe, along with how to make your own crispy tortilla strips.)

Trim flaps of excess skin from the chicken thighs with a pair of kitchen scissors. Heat a large, non-stick skillet over a medium-high flame. Add the chicken thighs, skin-side down, and cook without turning until the skin is golden brown. (Don’t be tempted to add a skim of oil to the non-stick pan while it preheats. The chicken fat will begin to render almost as soon as the thighs hit the pan. In fact, wear a sturdy apron for this process and a shirt you don’t care about ruining, and cover the nearby counter with waxed paper, because the hot fat pops and flies everywhere. This was one cooking process for which my dogs did not stay underfoot.)

Transfer the chicken to a 3.5-quart slow cooker, and pour off all of the hot fat into a heat-safe container to discard later. Wipe out the skillet with paper towels, leaving a little residue for flavor, and set aside.

In a blender, combine the tomatoes with their juice, the onion, jalapeño, and garlic, and purée until smooth. Retrieve the nonstick skillet and heat it over a medium flame. Pour in the tomato mixture. Bring to a simmer and let cook for about 3 minutes, stirring often, until the mixture has thickened slightly. Scrape every last bit into the slow cooker, and add 6 cups of chicken broth, the cumin, salt, pepper, and a bay leaf. Stir well, cover, and cook on low for about 5 hours, until the chicken thighs are tender.

With tongs, remove the thighs to a plate and set aside until cool enough to handle. Fish the bay leaf out of the broth, and discard. (Stiff and spiny bay leaves don’t soften after cooking and could cause choking if swallowed.) Shred the chicken, discarding the skin and bones, and return the meat to the slow cooker. Add the corn and cilantro (if using), and stir. Heat, covered, for several minutes, and serve, garnished as desired.

To garnish: tortilla chips to break over the top, freshly grated Romano cheese, fresh lime quarters for a squeeze of juice, and chopped avocado (if you remember that you bought one for that purpose).

Tortilla chip option: Lightly brush 4 fresh corn tortillas with vegetable oil, and slice into strips. Place on a baking sheet in a single layer and bake, stirring a few times, at 400°F. until golden brown, about 5-8 minutes. Keep an eye on them so they don’t burn. Strew a few crispy strips over the top of each serving of soup. 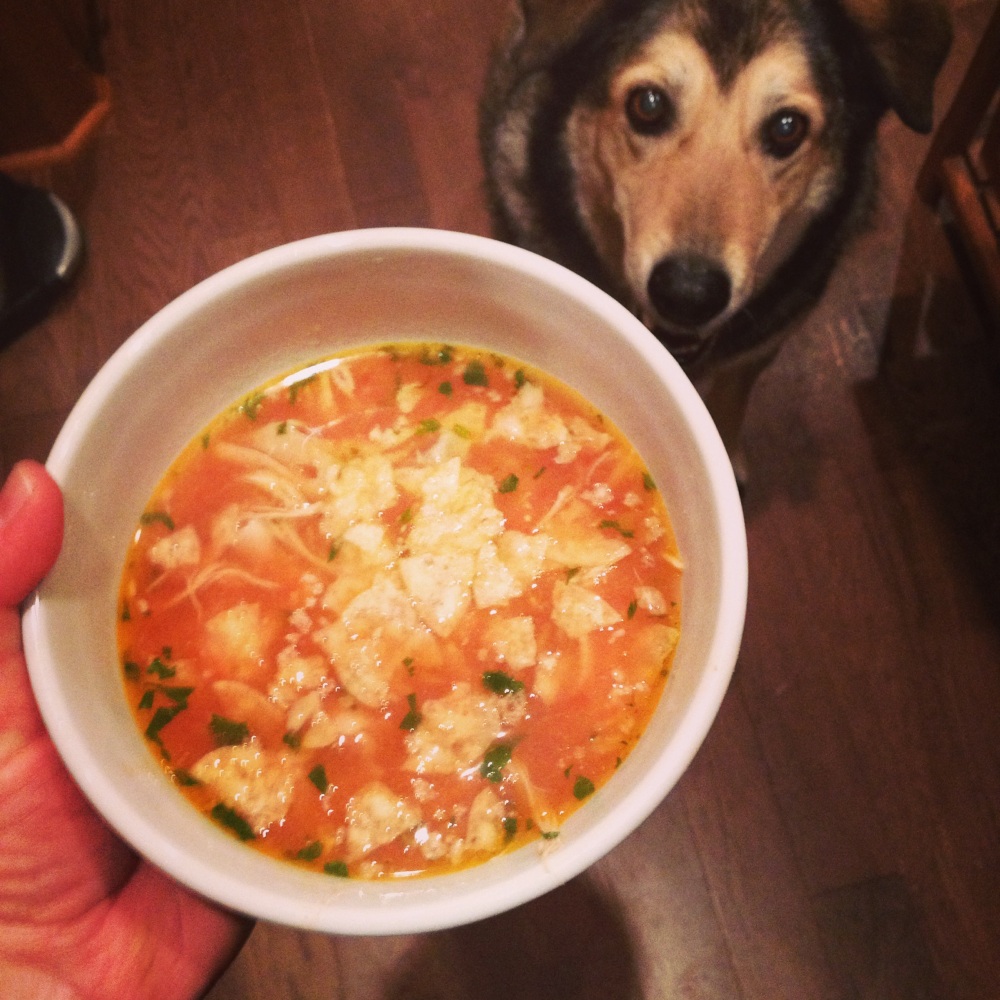