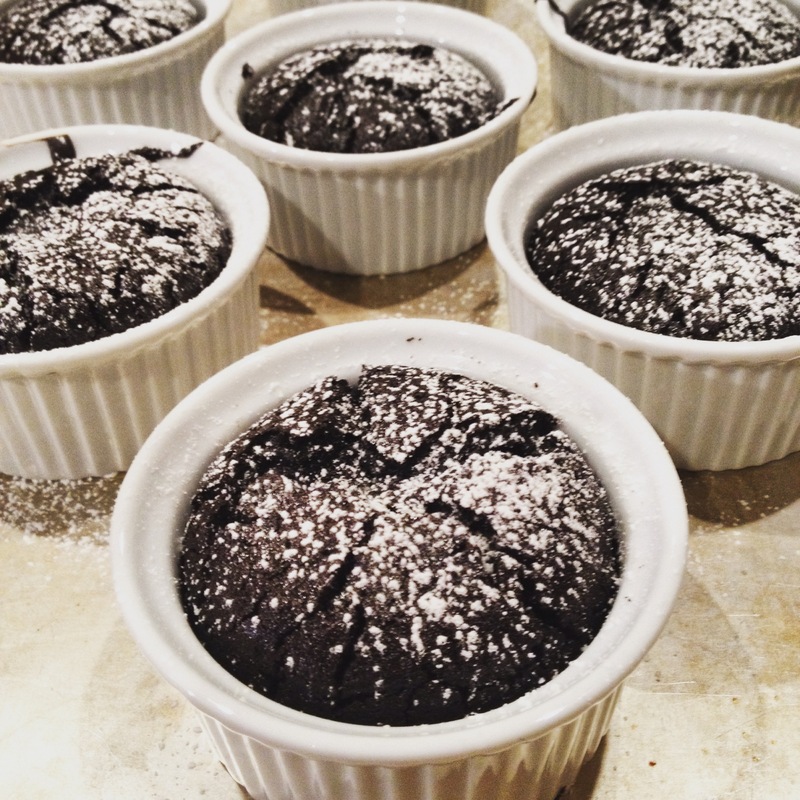 Cheesecake might’ve been a more appropriate, if ironic, choice for dessert to enjoy while watching the Miss America pageant on TV last week. Instead, people at my house had warm and delicious flourless chocolate cake. I would have made enough for everyone, contestants included, if that were possible. Those women looked like they hadn’t had dessert in a while.

Miss Georgia won the crown, and she is lovely. Her reign has just begun, and with no let-up in the pressure to be slim for at least a year, she probably was unable to savor her victory with some milk and cookies. But it would be nice if the rest of the contestants could relax the regimen and eat whatever they wanted, and not just for sustenance. No more parading around in bikinis for the world to judge contours and jiggles. Can everyone have cake now?

The older I get, the more I cringe during the  Lifestyle and Fitness (Thigh Gap and Cup Size) in Swimsuit segment, when 15 young women with ambition, intelligence, and drive are required to strut like showgirls across the stage in less fabric than a chihuahua’s Halloween costume.

If this is a scholarship pageant, then that’s a dichotomy my brain can’t handle anymore. Swimsuit segment protests aren’t new, yet the swimsuits this year are smaller than ever. I haven’t watched an entire pageant in many years and thus wasn’t acclimated to the shrinking coverage of America’s state missies. The teeny bikinis of 2015 took me aback.

For a fresh perspective, may I offer excerpts from the rules page of a pageant you might not have heard of? Miss BBB is the queen of the Bikes, Blues, & Barbecue festival happening this weekend in northwest Arkansas. Competition happens over two nights, with preliminaries Friday at a saloon, and the final on Saturday at a beer garden. Miss BBB’s constituents are the 400,000 bikers from all over the U.S. expected to attend the four-day motorcycle rally.  It’s a loud, boisterous crowd, but mostly jovial, so long as you don’t knock over someone’s Harley. The sheer numbers of people attending will make the dull roar of engines a constant backdrop of sound in the area from Wednesday through Saturday.

Women vying for the Miss BBB title must comply with several rules, some of which are designed to thwart lascivious behavior.

“No nudity or lewdness is allowed. Painted-on tops are not allowed. During their presentation to the judges, contestants may dance, pose, and interact with the crowd. Overtly sexual actions are not permitted.”

Okay, understood. Nothing there that the Miss America pageant organizers can learn from, and plenty that would make any mainstream, law-abiding, moderate-thinking pageant participant want to clutch her pearls. The rules go on to detail contestants’ minimum age (18 years), and warn against being late and unprepared. Contestants are “encouraged to exhort the crowd on their behalf.”

All to the good. There’s more stuff about arrival time and meeting with the emcee. But, here’s the part that I think elevates this pageant above its much more famous cousin in Atlantic City:

“Contestants may wear clothing of their choice to include bikinis, t-shirts and shorts or jeans, even dresses, whatever you feel makes you look best.”

How ’bout that? Miss BBB contestants can choose how much skin to reveal. News flash: I doubt they cover up. If you go to the festival’s website and click on the Miss BBB page, you will be greeted by a photo of a grinning, voluptuous woman, arms raised in victory or possibly an expression of “ta-daa!”, whose bikini bottoms barely conceal her nether regions.  (Sorry, I’m not providing the link for that. You can do the work yourself.) First prize is $1,000 cash, and lesser cash prizes reward the next four finishers. Maybe they’ll use the money to pay down their law school debts, or maybe they’ll buy beer. What matters is that each contestant is accorded the dignity of choosing to wear what she feels makes her look best. Does the contest objectify women? Sure it does, with their consent. But it doesn’t mix messages or obfuscate the obvious, like the Miss America pageant does.

Call a thing a thing, and be done with it. Brains and beauty aren’t mutually exclusive attributes, but when the Miss America system insists that smart, accomplished women strut nearly naked in front of millions of viewers in order to win money to pay for more education, it cheapens the mix.  It’s not about confidence and fitness. (Did I miss the kettle bell toss?) Instead, it’s about the hypocrisy that happens when a woman’s body is assessed as a commodity against the level of her intelligence in a contest that purports to value style, service, scholarship, and success.

The final irony? For her traditional frolic in the Atlantic City surf on the morning after her win, when wearing a swimsuit would’ve made sense, Miss America 2016 kicked up waves in a dress that skimmed her knees.

Let’s have some cake while we think about that.

Flourless Chocolate Cake, adapted from a recipe in Sheet Pan Suppers, by Molly Gilbert, © 2014, published by Workman Publishing Company, Inc., of New York, NY. I really like the concept of this book, where entire suppers are prepared and contained within a rimmed baking sheet. I keep seven sheet pans in constant rotation, between baking dozens of cookies, using the pans for prepping raw meats, and now, with the help of this book, roasting entire meals. In this instance, the sheet pan is used to hold 11 ramekins of delicious cake.

Preheat oven to 350°F. Place 11 ramekins (each about 3 inches in diameter) on a sheet pan.

Cut up the butter into chunks, then melt in a small saucepan over medium heat. Remove from heat, and stir in the chopped chocolate. Stir until the mixture is completely smooth. Stir in the vanilla extract.

In a large bowl, whisk together the granulated sugar, cocoa and espresso powders, and salt. Break all the eggs into a small bowl, making sure no pieces of broken shell are mixed in, and pour all the eggs at once over the sugar mixture. Whisk until smooth, scraping the bowl’s sides and bottom with a spatula. Add the melted chocolate and whisk thoroughly, scraping again to ensure that all the ingredients are incorporated.

Divide the batter evenly among the ungreased ramekins, filling each about 3/4 full. (The original recipe specifies 10 ramekins, but when I made the recipe, I filled 11.) Place on the center rack of the preheated oven and bake 30 to 40 minutes, or until the cakes test done.

Transfer the cakes to a rack, and let cool for a few minutes. Dust the tops with confectioners’ sugar, and dollop each with a scoop of vanilla ice cream before serving. Serve while the cake is warm. Leftovers (minus the ice cream) can be stored in the fridge for  3 or 4 days. I microwaved one on Day 2 until warm, then topped it with ice cream again, and it tasted just as good as fresh from the oven.