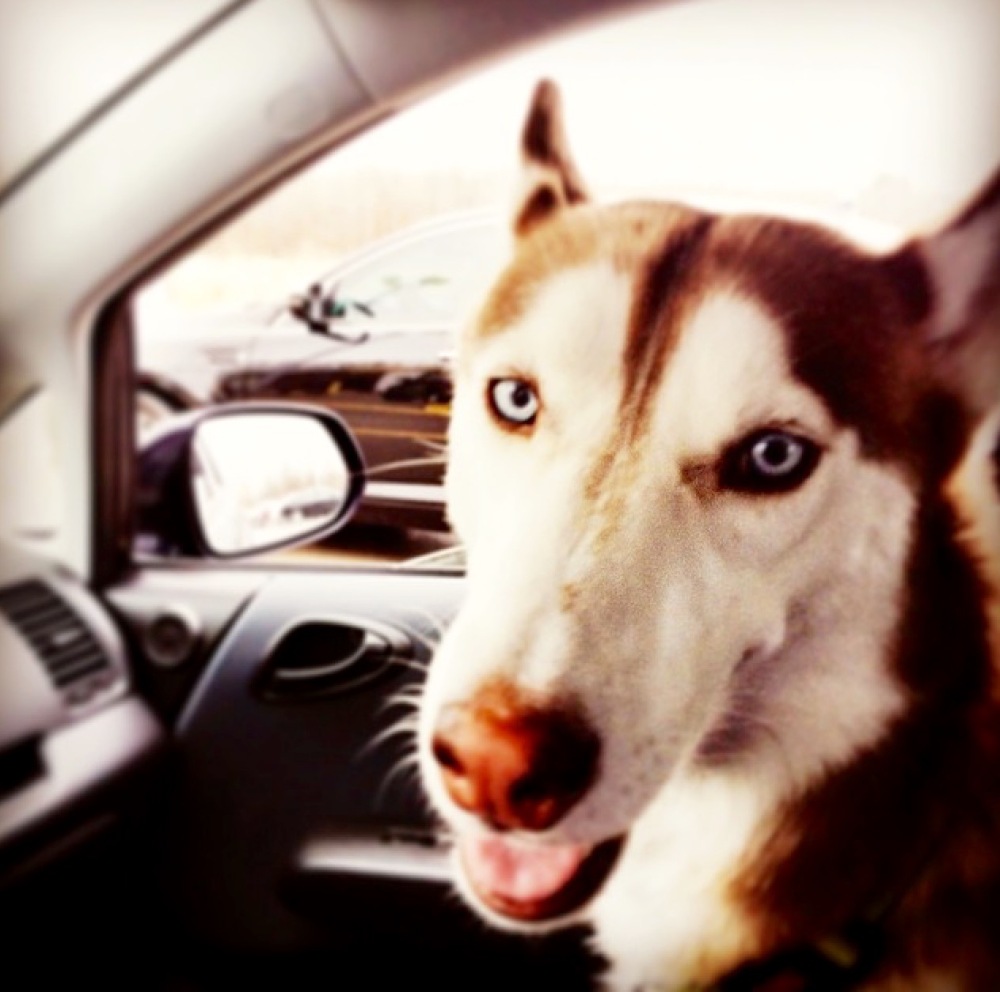 Wednesday afternoon. Last to-do: pick up some Chardonnay to serve with chicken cutlets, steamed rice, and broccoli. Kai the husky was riding shotgun, his preference any time a car door is open. Sometimes he even settles behind the steering wheel, and I have to flat out tell him he can’t drive.

We had just left the dog groomer’s, and the interior of my small car was redolent with flowery canine cologne and dog breath. A fresh layer of Kai’s downy undercoat settled on the beach towel lining his seat, as well as the parking brake lever between us. Macy and Kita panted quietly on the floorboard of the backseat.

The liquor store clerk staffing the drive-through handed me my Leese-Fitch, then asked if Kai could have a biscuit. Kai’s sky-blue eyes are attention-getters, but I had two more dogs in the car that the clerk probably couldn’t see. I asked if we might have three. The young man stood on tiptoe, peering past the front seat, and met the gaze of four more eyes. “Oh!” he said, and disappeared, returning after a moment with a big smile and three biscuits fanned out between his fingers. My passengers were very happy.

I like a liquor store that stocks dog treats at its drive-through window. I like this chicken dish, too.

I still mourn the demise of Everyday Food magazine, an excellent cooking monthly published 2003-2012 by Martha Stewart Living Omnimedia. I subscribed from start to finish, and each issue stands in chronological order on a shelf in my office. I consult them regularly. Three paperbacks have been published thus far from recipes among that collection. Great Food Fast is one of them.

Soak the cutlets in brine for 15 minutes, then drain, rinse, and pat dry with paper towels. Season both sides with pepper and a little salt.

Heat the olive oil in a large, non-stick skillet over medium-high heat. Add the cutlets and sauté for several minutes until golden brown, then turn and sauté the other sides. When the cutlets are cooked through, remove to a plate, cover with foil, and keep warm.

Add the wine to the hot skillet and stir, deglazing the pan. (Take care that the wine doesn’t catch a lick of flame from the burner and ignite. But, if it does, as happened to me two nights ago, just smother the flame with a pan lid large enough to cover the pan. Edited 3/19/17.) Cook about 1 minute, until the wine has been reduced by half. Whisk in the cream, mustard, and tarragon, and cook for a couple of minutes over medium heat, gently whisking the whole time, until the sauce is hot and thick.

Plate the chicken. Stir any cooked chicken juices that accumulated into the mustard-cream sauce, then spoon the sauce over the chicken. Serve immediately with rice and a green vegetable.